Keep this Keto Dunkin Donuts Guide handy for when you need a caffeinated pick-me-up in the drive thru! With affordable coffee options and an all-day breakfast menu, Dunkin is a slam dunk for those of us on a Keto diet! Here's what you need to know to successfully order a low carb meal at Dunkin.

Dunkin Donuts is fairly limited on sweeteners with typical offerings include Splenda and table sugar.

Unfortunately, sugar has way too many carbs for a ketogenic diet. I could easily drink my daily limit in one iced coffee!

Splenda, on the other hand, has maltodextrin and also doesn't mix very well into iced coffee.

Above all, I typically end up bringing my own stevia or monkfruit drops.

The creamer options are less than ideal, too. In other words, it may be worth looking into bringing your own.

I do love that almond milk is an option, but it's the sweetened version.

Also, while the cream may be the best option, it's mixed with milk (like half-and-half), which boosts the carbs a bit.

If you're avoiding dairy and still want a lower carb coffee with cream, I highly recommend using coconut milk or Nutpods. They're not super portable, but you can always pour a little into a container and bring it with you!

Unique to Dunkin are the flavor shots that can be added to any of their beverages. Best of all, they're unsweetened and sugar-free!

Flavor shots can be added to any beverage, and you can even order multiple flavors.

The following flavors are available: 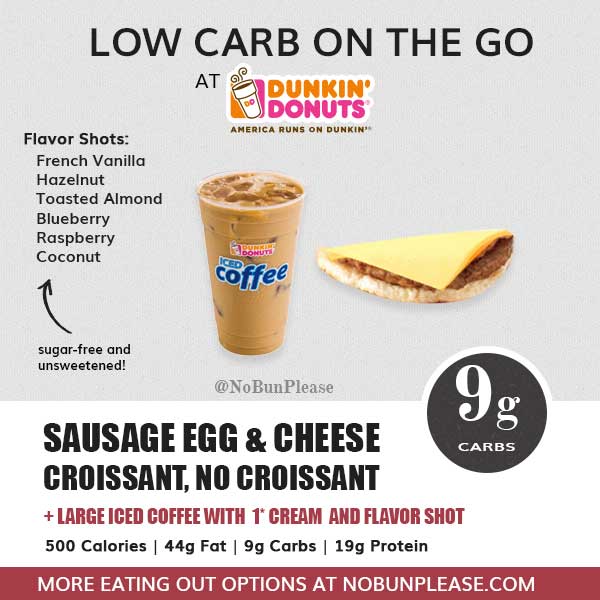 By default, the black coffee at Dunkin comes with a small carb count and I'm not entirely sure why.

This should not be a cause for concern, however. This is likely to count for the amount of coffee used to brew, and not after the waste is discarded.

Ordering a small latte? Here's how that breaks down with the different milk options.

As long as your iced coffee has no cream or sweetener, it should stay fairly low in calories.

You will want to order iced or hot tea that is unsweetened. You can add some Splenda or your own sweetener, if you like.

Also avoid the fruited teas, as well. They have sugar added, which isn't very Keto friendly.

No nutritional information for hot tea is listed on the Dunkin website, but it does state that "all varieties of our tea and herbal infusion have no nutritional significance."

The nutrition information for the breakfast sandwiches with "no bread" is the same for all breads offered at Dunkin including the bagels, english muffins and biscuits.

Information for the wake up wraps without a tortilla is not available through Dunkin. Therefore, we have to make a rough estimate for this menu item.

For more lax Keto followers, getting these without the tortilla would likely be a fine option.

After all, they're still only about 15g carbs *with* the wrap. I would account for roughly 3-4g carbs, just to be on the safe side.

Do you have a favorite low carb option from Dunkin?

« Keto "Potato" Salad with Cauliflower
Is Popcorn Keto Friendly? It Depends on Who You Ask. »
2021 shares