I was fat, at 332 pounds I was well over 100 pounds above my own idea of what I should weigh. I had metabolic syndrome, chronic pain, COPD, Pulmonary Hyper Tension, sick all the time and no matter how much I ate I would be hungry within an hour or 2. I was pre-diabetic and spiraling out of control with no clue how to stop. The doc at one point told me I would be dead in 5 years

I had heard about low carb and it just went against everything I had ever been taught in school, but low calorie diets didn’t work because I was always to hungry for me to stick with them long term, so I would cheat, and then eat more out of guilt etc. So I did some research and decided to try low carb for a month. It was hard, after about 3 – 5 days I started craving sweets and bread no matter how much I ate meat and veggies, I craved potatoes and other stuff I couldn’t have, but I knew from reading the cravings would pass. So I held fast and they passed, then I felt like I had the flu for a few days, I was tired and had aches and pains like a drug addict going through withdrawal. And that too passed, and suddenly all the fog lifted and I felt so clear headed, alert, and more energized that I had in…well I don’t know if I ever felt like I did right then! Also, food cravings went away, I would forget to eat! I would wake up hungry, eat until I was satisfied, and then could go all day with just a handful of tree nuts (not peanuts, they grow underground and are for animals that are able to dig without tools) to snack on or a couple deviled eggs and I was fine. Then a dinner of some fatty cut of meat (ribeye steak is diet food?) with all the leafy greens I could eat, and I was done for the day!

I stuck with low carb foods for about 9 months and was down to about 275 pounds, and life happened, and I went back to eating breads, potatoes, and other stuff I had given up. Quickly I went back up to 298 pounds and was sick again, hurting and miserable. So finally in April of 2012 it was time to try again to take control of me away from food. My girlfriend and I decided to do it together and be each other’s support system. So now we are both much smaller (she has gone from a size 15 to a size 9 and I have gone from a 44 inch waist to a 38). I lost 40 pounds over last summer and fall, didn’t gain any back over the winter and we aren’t done yet, in April we intend to go back into the intake stage(less than 20 carbs) for a while, and try to reach our final goals and then follow a healthy lifestyle that will include whole foods, little if any processed grains and lots of fresh veggies, natural cuts of meat (We don’t trim fat) and some fresh fruits. We eat from what nature provides (or try to most of the time). If it takes any kind of process, then it isn’t meant for humans. What I mean is that if you can’t pick it or kill it and eat it, then you shouldn’t. If you ever have any questions, feel free to ask me, I love discussing it as it has become part of my life. 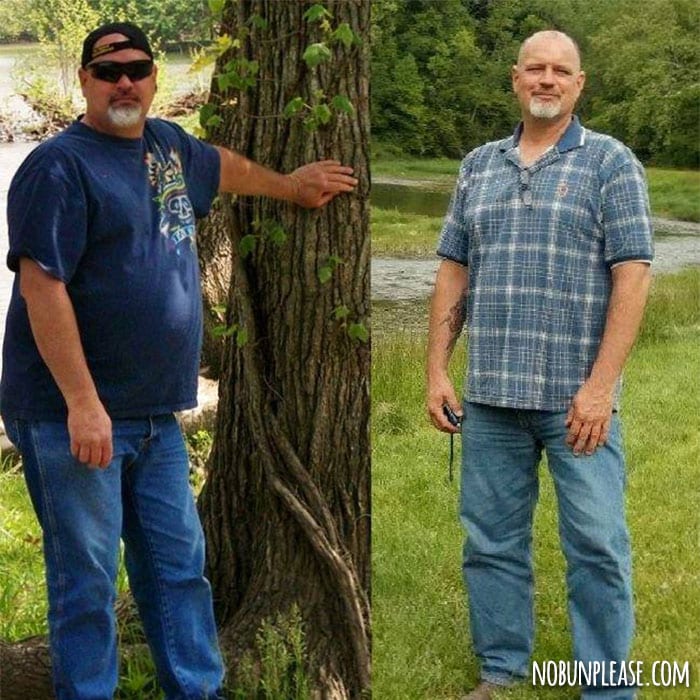 A benefit of the low carb way of eating, I think, is that with all of the protein intake, there is no muscle loss,(I've even gained some muscle) and after losing about 75 pounds(almost 25%), I don’t have loose skin hanging off me. I’ve also done all this without exercise… every so often I pick up some light weights and lift them, but no real program per se, I understand though, that when exercise is added to the lifestyle the change is even more dramatic as the muscle increase is startling and the fat loss is even quicker!

Here it is 4 years later. I am off of supplemental oxygen, almost all meds are gone, I can walk for miles and run a little. I no longer have any diagnosis other than mild high blood pressure and seasonal alleries...I fired the doctor that said I was dying...he just doesn't understand.

Don't listen to anyone, learn what works for you, then do it.

I make a sweet and spicey stir fry that is the bomb...using lemon juice, splenda, franks hot sauce and sugar free teriyaki for the sauce...then just add your favorite meat and veggies.

Where can you find Alvin?

Alvin can be found on Facebook. Feel free to drop him a message with any questions!

Have you had success with a ketogenic/low-carb diet and want to share your story? E-mail me at nobunplease@gmail.com.